10 magical fairy tale destinations to put on your bucket list 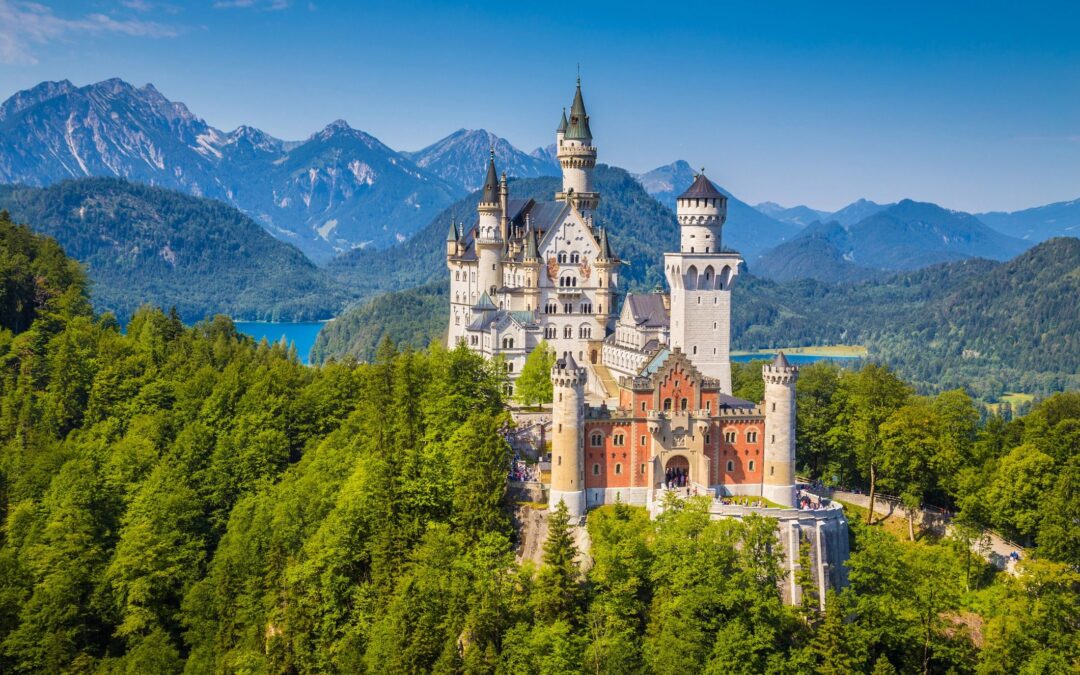 Our world is a glorious place. The landscapes, the architecture, the history – they never cease to amaze me. Sometimes, I find it hard to believe that so much beauty can exist. Viewing some of these places – the majestic mountains, the quaint towns, the imposing castles – conjures up images of fairy tales that captivated us as children.

So, I’ve decided to share with you 10 magical destinations around the world that look like they could be straight out of a fairy tale. They may or not have been the inspiration for one, but they certainly could be. Places that need to go on your bucket list right this moment. This was a hard list to do, only because choosing 10 meant ignoring about 100 other magnificent places! So, sit back, and let’s imagine we have jumped into the pages of a children’s book for just a few moments. 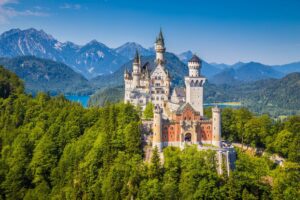 Let’s get the obvious out of the way. Neuschwanstein is the inspiration for Disneyland’s Sleeping Beauty’s Castle.  Built by King Ludwig II, in the 19th century, he designed it to outshine his childhood home, Hohenschwangau Castle. Weirdly enough, as magnificent as it looks, only 15 rooms and halls were completed before the king died, even though it was supposed to have more than 200. Visiting it is easy as it sits only an hour train ride away from Munich. 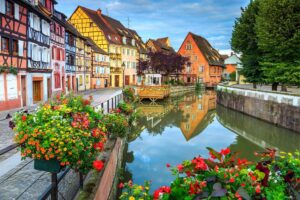 Nothing can truly prepare you for the beauty that is Colmar in the Alsace region of France. It does look like it is out of a movie set, and is supposedly the inspiration for Beauty and the Beast.  Known as “Little Venice”, it considers itself to be the capital of Alsatian wine.  It’s hard to tell exactly how far back the town dates – it was first mentioned by Charlemagne in the early 800s but was granted status as an imperial town by Frederick II in 1226.  Christmastime in Colmar is truly magical, with 6 Christmas markets and décor simply out of a storybook. 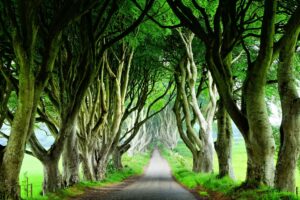 Not all fairytale spots are towns or castles.  This gorgeous row of beech trees in County Antrim, Ireland was planted by the Stuart family in the 18th century as a way to impress visitors to their mansion.  However, fans of Game of Thrones will recognize this beautiful road as the Kingsroad. They are also the most photographed piece of nature in Northern Ireland. 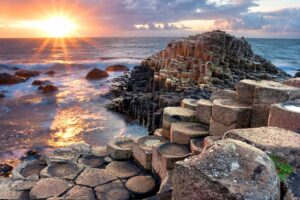 Just a short drive from the Dark Hedges is the Giant’s Causeway (even the names are reminiscent of fairy tales). These massive basalt columns are 60 million years old.  Legend has it that the Irish giant Fionn mac Cumhail (Finn McCool) and the Scottish giant Benandonner hated each other. After one too many insults by his fellow giant, Fionn built a path of stepping-stones to reach Scotland. This path was ripped up by Benandonner, which resulted in what is now known as the Giant’s Causeway. 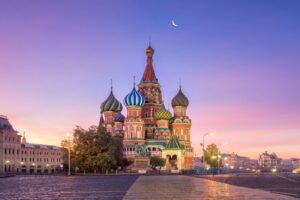 This majestic spot in the heart of Moscow doesn’t look real – its colorful domes and spires look as if they should only be found in a fairy tale. Commissioned by Ivan the Terrible, it is said that he blinded the architect so that he could never reproduce his masterpiece. It is a museum now, and visitors are invited to wander the chapels and a secret wooden staircase discovered in the 1970s. 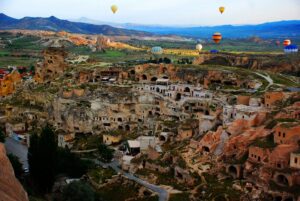 Cappadocia is a place that is reminiscent more of a lunar tale than one on Earth.  Ancient volcanic eruptions dating back to the 4th century created a fairytale landscape dotted with fairy chimneys, mushrooms, and pillars that reach as high as 130 feet. Humans took this landscape and tunneled into it entire towns and complexes. Stay in a cave hotel when visiting – it might be the closest experience to visiting another planet. 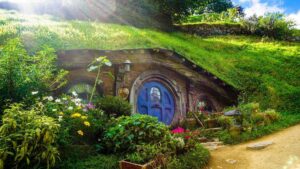 Ok, so this one is sort of fake. It’s an actual movie set constructed for the “Lord of the Rings” and “The Hobbit”. But, it’s so cute, I couldn’t resist adding it to the list. Your visit to the Shire can include touring the Hobbit Holes, the Mill, and ending with a beverage at the Green Dragon Inn. Set in the Waikato region of New Zealand, you will quickly see why this area was selected to recreate Middle Earth. 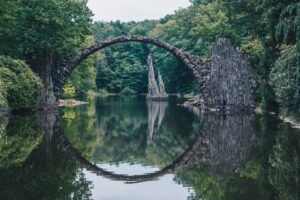 Is this the fairytale of princesses, or are you about to sell your soul? Rakotz Bridge, northwest of Dresden, is known as a “devil’s bridge”. It is a stone arch bridge that when reflected in the water, it makes a perfect circle.  They are scattered throughout Europe and each bridge typically has a devil related myth associated with it. Many myths surround Rakotz, including one that says one will uncover his mystic abilities if you sail under it during a full moon. Some people say the builder sold his soul to the devil to build it, and others believe it is a portal to another world. Tourists aren’t permitted to walk on it, but how about a boat ride? 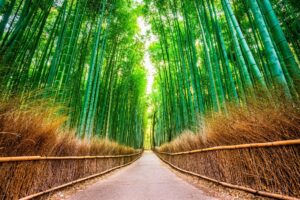 Where to start?  Cherry blossoms, Buddhist temples, the imperial architecture  – Kyoto is a fairy tale waiting to happen.  Perhaps, however, the most magical spot is just outside the city. Here you will find the Sagano Bamboo Forest. As you wander through, you will find yourself awash in green as the light filters down. The sound of the wind rustling through the stalks is mesmerizing and peaceful. It is on the list of “100 Soundscapes of Japan”, everyday noises intended to encourage locals to stop and enjoy nature. 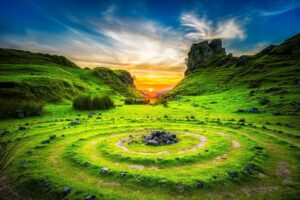 Isle of Skye at dusk

Just off the west coast of Scotland,this is a place made for fairytales.  What can you say of an island that has fairy pools, a fairy glen, and a fairy knoll?  There is no real true folklore or legend associated with many of the spots here, but some believe fairies are the only ones who could have created a landscape that is so dramatic that you may think you have crossed into a magical realm. Walk through the Fairy Glen, and you may expect a mythical creature to cross your path. Of course, don’t forget a visit the Fairy Pools, stunning blue-green pools fed from waterfalls in the Cuillin Mountains. They may be tempting, but only the bravest of swimmers should attempt the frigid waters.