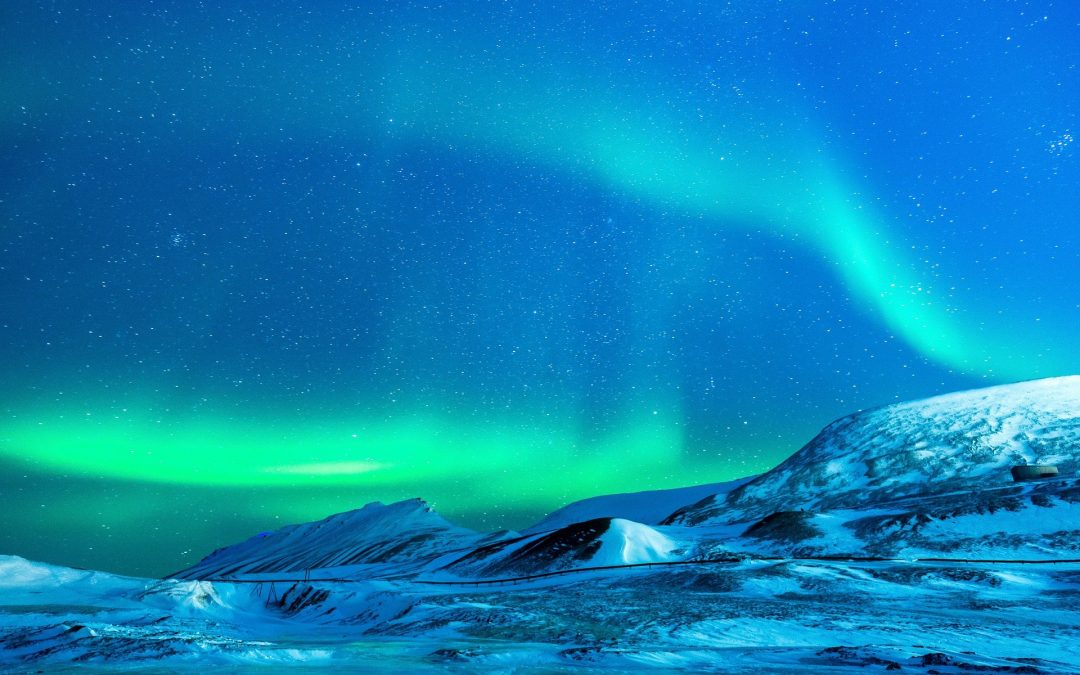 A friend of mine in Canada wrote on Facebook that recent solar activity caused the Northern Lights to be seen, and she posted the most gorgeous picture she took of them. This got me thinking about how they are on my personal bucket list of things to see, and how so many clients come to me for trips and have the Northern Lights on their wish lists.

How about you?  Are the Northern Lights on your bucket list?  Have you been wondering where to go to see them?  If so, here are 10 of the best places to view them.

First, what are the Northern Lights? Also known as the Aurora Borealis, simply put, they occur near the Earth’s magnetic poles when charged particles collide with gases in the upper atmosphere.  These collisions cause tiny flashes that appear to move or dance in the sky.

The best time of year to see them is January to March.  However, if you are not partial to cold, you do have a chance to see them in some places in September and October (as evidenced by my friend’s experience), though it’s not guaranteed. And your chances increase in November and December.

So, where should you go for optimal viewing? 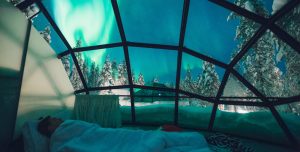 Kakslauttanen is designed to view the Northern Lights.  Here, the Northern Lights “season” lasts from late August through the end of April. Book yourself a few nights into a glass igloo at this Arctic resort and treat yourself to some of the most spectactular views on the planet.  BONUS: The resort is in Lapland.  Consider spending the holidays in Santa’s home.

This is a place that takes the Northern Lights very seriously. Tromsø is the largest city in Northern Norway and offers probably your best chance of seeing the lights. Visit in late January and early February, and enjoy the Northern Lights Festival, a top-notch celebration of music, dance and more. Combine your trip with some dog sledding, whale watching and snowmobiling and you will have and experience you will never forget.

Fairbanks is an amazing place to see the Northern Lights because it sits over the Earth’s geomagnetic north pole.  Aurora season here lasts August 21 to April 21 and visitors can expect to see the lights at least 4 out of 5 clear nights.  The bonus is that by visiting in late summer you aren’t subjected to biting cold.  Pan for gold or take a ride on the Riverboat Discovery.  Visit the Santa Claus House in the city of North Pole.  The World Ice Art Championships are held in Fairbanks every February and March.

This is considered one of the single best places in the world to see the Northern Lights. The climate produces virtually no precipitation so it’s ensured clear skies practically all the time.   The best time to catch the lights is almost every night from September through early April.

Back in the United States, the Upper Peninsula in Michigan provides some top Northern Lights sightings in the spring and fall. Peak viewing monhs are April, October and November. Plan a trip to Mission Point Resort on Mackinac Island where resort staff will make sure you are notified of potential sightings. Nearby Headlands International Dark Sky Park is also a perfect spot for aurora viewing. In the summer, it’s the perfect spot to see the Milky Way and meteor showers.

Staying in the US, head to Voyageurs National Park on the border of Minnesota and Ontario.  This International Dark Sky Park (land that possesses an exceptional quality of starry nights and lack of light pollution) provides guided tours as well as boat trips to see the lights depending on the forecast.  You can also spend the night deep in the woods in a heated yurt. 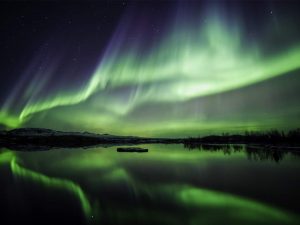 Iceland has become increasingly popular to visit over the years, and with good reason.  It’s an easy European country to get to from the United States (only about a 5 hour flight from the East Coast).  Stay in Reykjavik, and take an excursion and you’ll be sure to witness the Northern Lights.  It’s a sparsely populated country, so you don’t have to travel far from the city to get away from the light pollution. Take a trip to Thingvellir National Park. It was the site of the country’s parliament from the 10th to 18th centuries and where the Europe and North America meet.  It also offers clear night skies where you can get spectacular views of the lights. 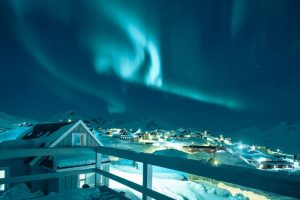 You probably have never given this country much thought, but Greenland is actually a pretty easy place to get to.  It’s only a 4.5 hour flight from Copenhagen, and only 2-3 hours from Iceland, making it a cool combo with a trip to either one of those places. Almost all flights arrive in Kangerlussuaq which makes it the most accessible place to view the Northern Lights.  Plus, it has more than 300 clear nights a year.  Throw in a trip to the Greenland Ice Sheet and some dog sledding, and you have a heck of an experience.

Want to see the Northern Lights AND polar bars? Then Northern Hudson Bay in Manitoba is the place to be. Some of the most spectacular light displays are to be found here and the great thing is they can be found throughout most of the year.  Winter is peak time, though September is probably the most favorable month due to warmer temperatures.  Other adventures in the area can include polar bear tours, dog sledding, and a journey on the Hudson Bay Railway.

Scotland is probably one the last places you would think of when thinking of the Northern Lights, but Northern Scotland actually lies at the same latitude as parts of Norway and Alaska making your chances of spotting the “Mirrie Dancers” as they are called very good.  The islands of Lewis, Harris, Uist or Barra all have little light pollution so any one of them are prime viewing spots. The best times of year are in the winter, though it’s not uncommon to see the lights as early as September or as late as April.  Visit in February and you can catch the Dark Skies Festival featuring theater, live music, visual art and astronomy talks.

When you’re ready to book your bucket list trip to see the Northern Lights, give me a call!  I can put together your dream package that you’ll never forget.

Looking for some more travel inspiration?  Check out some of these articles.

10 Bucket List Trips That Every Should Experience At Least Once

10 Magical Fairytale Destinations To Put on Your Bucket List