10 Amazing Festivals Around the World that You Must Check Out 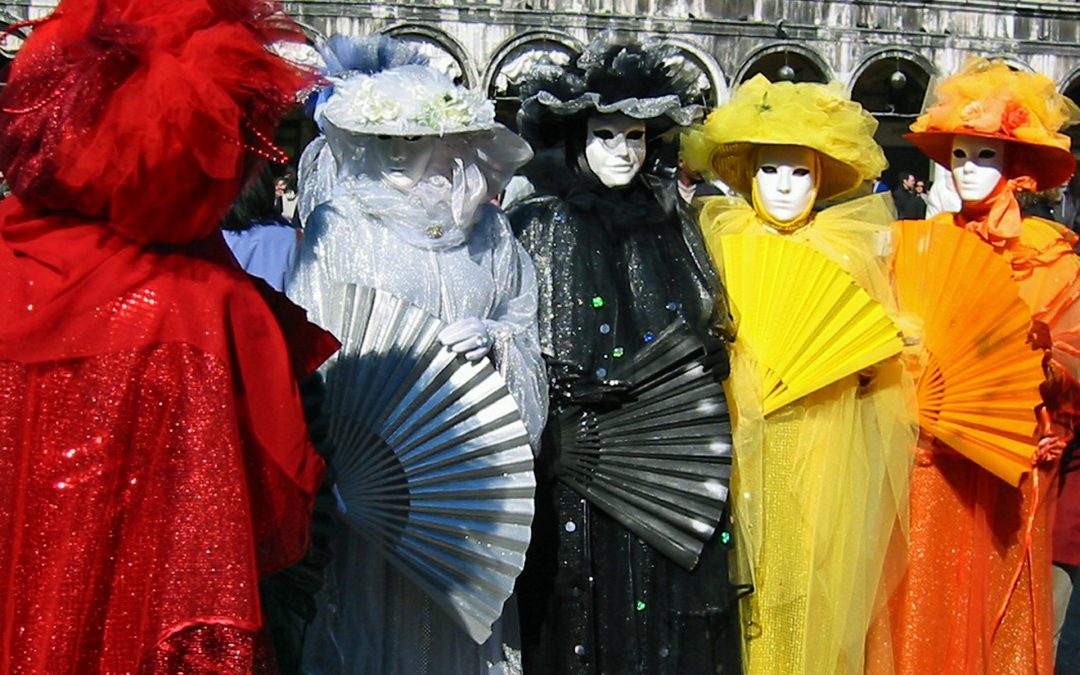 One of the great things about traveling is attending a local festival or fair, and seeing how different regions of the world celebrate different holidays, events, and traditions.  It’s a fun addition to your vacation and adds a nice twist to your memories.

This world is so full of amazing festivals that are destinations and vacations in and of themselves.  Have you ever considered planning a trip around one?  If not, here are 10 amazing festivals around the world you may want to tackle in the future. 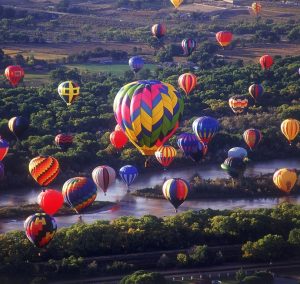 Balloons over New Mexico during the Albuquerque Balloon Festival

The Albuquerque Balloon Festival is truly a sight to behold.  For nine days every October, the skies over Albuquerque, New Mexico fill with over 500 majestic hot air balloons.  In addition to balloon races, it features events such as piloting skill and speed competitions, concerts and shows, and balloon rides for spectators. It is the largest balloon festival in the world and will celebrate its 50th anniversary in 2022.  Not bad for an event that started with just 13 balloons.

This annual festival in Munich is the world’s largest Volksfest (beer festival and funfair). 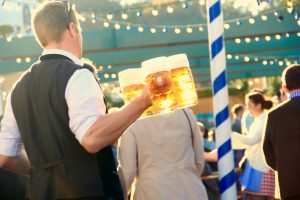 It’s held mid to late September with more than 6 million people attending each year.  Originally held to celebrate the marriage of Crown Prince Ludwig to Princess Therese of Saxe-Hideburghausen in 1810, it has become known as a celebration of Bavaria and Bavarian culture.  Locals take the opportunity to show off their dirndls and lederhosen. While it is known for the sheer quantities of beer consumed (over 7.7 million liters), it’s a family event, with amusement rides, games, and attractions, and of course, traditional foods.  It was canceled due to the coronavirus pandemic in 2020 and 2021 and is scheduled to continue in 2022. 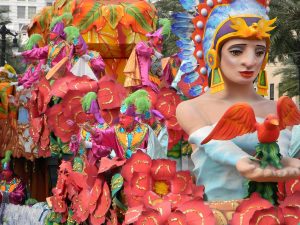 Mardi Gras is celebrated worldwide in various ways as the last day of Carnival season and the day before the Lenten season begins.  However, the Mardi Gras celebrations in New Orleans are probably the most popularized and well-known around. It is a day about music, parades (so many parades), celebration, and excitement. While there are traditions that have been around for years, such as the many krewes that make up the numerous parades, there is room for new traditions.  When the coronavirus pandemic canceled the 2021 Mardi Gras parades, the Krewe of House Floats was created, and the citizens of New Orleans decorated their homes as elaborately as any parade floats.  Mardi Gras organizers say that’s a tradition that they plan to continue alongside the parades and other festivities.  Hotels book up early, so plan accordingly and laissez les bon temps rouler! 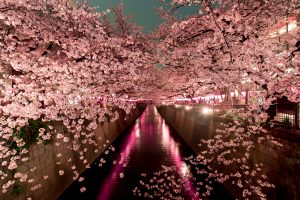 Cherry Blossoms at night in Tokyo

Cherry blossom festivals, known as hanami (literally means viewing flowers) in Japan, are an important part of Japanese culture and a held all over the country in the spring.  The trees bloom at different times throughout Japan so if you want to see the full blossoms, you need to plan carefully. They only last for about two weeks. For example, cherry blossoms in Okinawa tend to bloom in January, whereas they appear in Tokyo and Kyoto between March and April. When they are in bloom, they are glorious. Families celebrate by flocking to the parks for picnics under the trees.  Finding the best spots has become almost like a competitive sport in and of itself. The blossoms themselves are the main attraction, but you will also find traditional Japanese performances, including tea ceremonies held under the trees. 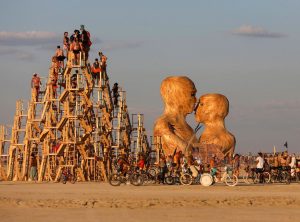 Once a festival for bohemians and free spirits, Burning Man has become popular amongst social media influencers and celebrities.  Its focus is on art and self-expression.  The name comes from the ceremony at the end of the event – the symbolic burning of a wooden effigy known as The Man. I probably have no business including it here because it’s hard to explain, but people that attend say it’s life-changing.

If you are a lover of the arts of all kinds, then the Fringe is an absolute must.  Billed as the largest arts festival in the world, it celebrates creativity from all corners of the globe.  It caters to all ages and includes theater, dance, musicals, opera, circus and so much more.  You will find performances from well-known entertainers to students and unknown artists just starting out.  It’s held every August, and the 2022 festival will be the 75th anniversary. 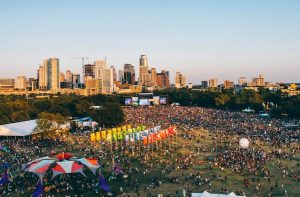 This annual music festival held every fall originally began as a single weekend event.  But its overwhelming popularity caused organizers to expand it to two weekends back in 2013.  Each year, you will find 8 stages with music from genres ranging from rock, indie, folk, hip hop, and more.  Performances go from 10am to 10pm, plus there is an art market, children’s activities and plenty of food and drink.  At least 450,000 people attend each year, so plan early. In 2015, the Auckland City Limits Music Festival debuted in New Zealand, followed by the Sydney City Limits Festival in Australia in 2018. 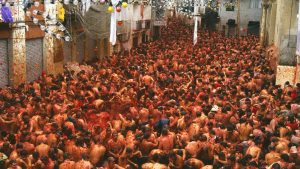 La Tomatina, the annual food fight featuring tomatoes, began completely by accident.  In 1945, a fight during a parade in the town of Buñol led to parade-goers throwing tomatoes from a nearby market stall at each other.  Every year after that, young people got together to unofficially throw tomatoes. In the 1950s, Franco tried to ban the event due to its lack of religious significance, but people persisted and in 1957, La Tomatina Festival became an official festival.  It is so popular that they even have a Tomatina just for kids ages 4012. The Festival is not a total free-for-all, however; because it brings so many people to Buñol, it has become a ticketed event so you need to plan accordingly. 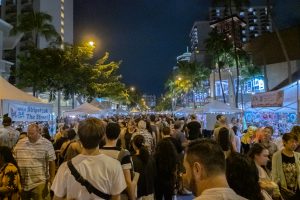 I would be remiss if I did not mention the funkiest food festival in the United States, Spam Jam – Hawaii’s celebration of canned meat.  There are Spam festivals around the country, but this one is the largest.  More spam is consumed per person in Hawaii than in any other state in the US; almost 7 million cans are eaten every year there. Spam Jam celebrates this the last week in April by closing down Kalakaua Avenue in Waikiki for a giant block party.  Some of the city’s finest restaurants serve up Spam in different ways, and vendors sell Spam-themed items.  Do you think pineapple on pizza is odd? Try it with a slice of Spam. While it’s probably not worth planning an entire trip around, Spam Jam would make a fun, whimsical addition to your trip to Hawaii. 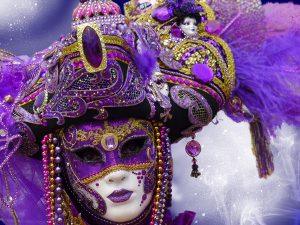 The Carnival of Venice is an annual festival that ends on Shrove Tuesday (Mardi Gras), the day before Lent.  It originally began way back in 1162 to celebrate the victory of the Venetian Republic over the Patriarch of Aquileia. The highlight of this 2-week festival is the elaborate masks worn by Venetians and festival-goers.  There are events for all budgets, from elaborate costume balls to free shows and costume parades.

Looking for more travel inspiration?  Check out these articles: