Ready for one of a kind cruise? Try ADULTS-ONLY cruising with Virgin Voyages 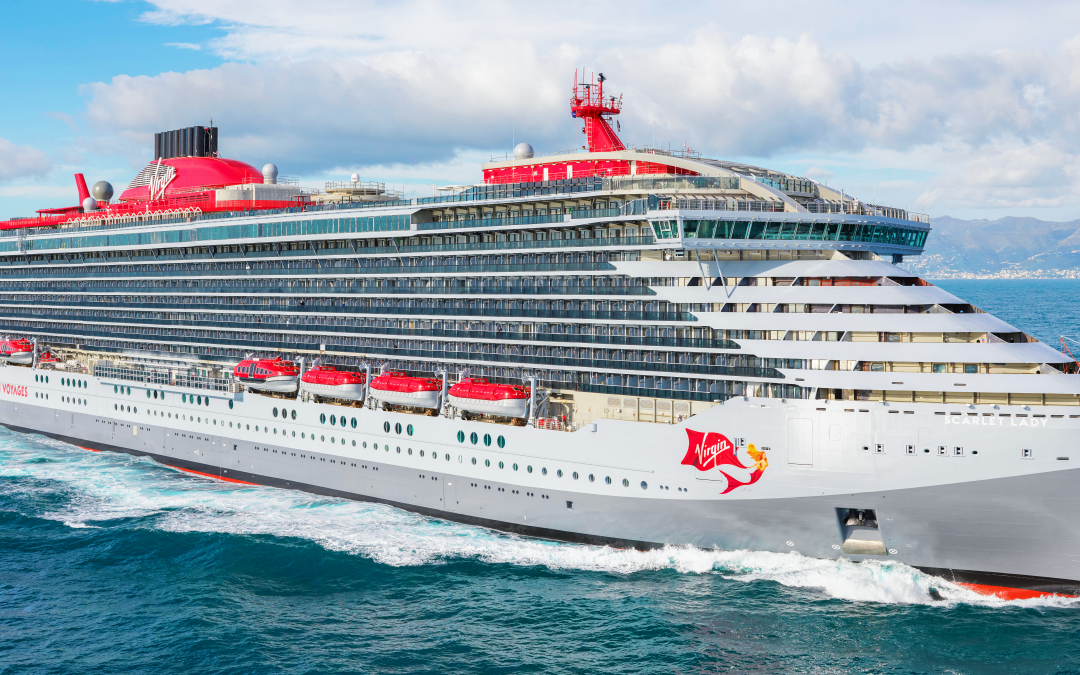 I just took another cruise and it was unlike any cruise I have ever been on. It was almost like the anti-cruise.  Adults-only cruising. No dress codes. No main dining room.  No rules. Everyone’s a rockstar.  It was Virgin Voyages and I can’t wait to try it again!

You see, amid all the turmoil in the cruise industry and the mainstream cruise lines working to get back up and running, Virgin Voyages has sailed out of the gate determined to set the cruise world on its head and I can’t deny that it’s doing just that.

We were booked on Virgin’s Mayan Sol itinerary that stopped in Bimini, Bahamas and Costa Maya, Mexico.  One of the first indications that this was going to be a different experience was when we boarded the ship, the Scarlet Lady.  Having just come off a Royal Caribbean cruise that morning, we were used to wearing masks in all indoor spaces.  However, we were greeted by a crew member telling us to take ours off (we had to wear it in the terminal at the Port of Miami).  Since the ship is adults-only – 18 and over – everyone onboard was vaccinated.  Plus, we had just gotten tested just minutes before boarding.  I admit, not having to wear the mask was a refreshing change, though a little weird feeling. 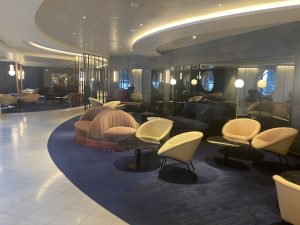 The Roundabout – a chic alternative to the cruise ship atrium

We entered the ship and the first thing we noticed was the sleek design – rather than being cluttered with an overabundance of art and sculpture on every available surface – the ship was quite minimalistic in design.  It looked more like a hip, hotel lobby, a la W Hotels, than a cruise ship. Guest services desks were replaced by high, round tables or pods, or long rectangular tables.  The entire ship is created for lounging and socializing.  There are no defined barriers between crew and guests (if you are one of those people who does not like to see crew mingling with guests or eating in the same space as the guests, then this ship is not for you). There is no cruise director. In fact, none of the bridge crew, not even the captain, wears traditional uniforms, including stripes.  I could have walked past the captain 100 times and I never would have known.  Guests are called sailors, not passengers, and we sailed on a voyage and a vessel (not a cruise and a ship, thank you very much).

The Scarlet Lady has 1,330 cabins and 78 “Rockstar Suites”.  Our cabin was quite Ikea-esque in design but comfortable.  Rather than the larger desks many cruise 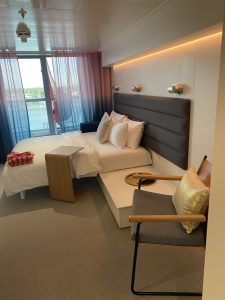 Our cabin – the bed could fold into an L-shaped couch for socializing. Notice the hammock on the balcony

lines like to put in their cabins, there was a slim desk-like table, along with a chair designed less for comfort and more for taking up a corner. The bed looked like a traditional bed, but in fact, could have been folded into an L-shaped sofa for socializing – the idea being that you might want to entertain in your cabin.  No cabin is uniform.  Some start narrow and open up, and others are the opposite, creating the illusion of space. Best of all about the cabin – there’s a hammock on the balcony! I love to sit on my balcony at night and listen to the sound of the waves as the ship moves through the water.  To do so in a hammock was absolute bliss!  And the luxurious throws they put on the bed – I am obsessed with them and was very disappointed to find they weren’t for sale. Everything in the cabin can be 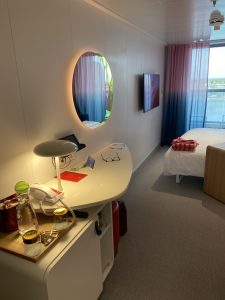 Desk/table in our cabin. All lights, the tv and the curtains could be controlled by the tablet.

controlled by a tablet – the tv, movies, curtains, and lights.  If you want your room made up, you hit a switch near the front door rather than the usual magnets.

Outside the cabins, you will find features not found on other ships.  Rather than a main dining room, there are 6 restaurants, ranging from the Test Kitchen, a cooking lab and restaurant, to Razzle Dazzle, a vegetarian-forward eatery, to the Extra Virgin which serves up elevated italian dishes. There is no buffet, but instead, a food hall called the Galley with eight stalls, including sushi, tacos, and all-day breakfast.  In addition, there is a pizza restaurant with custom pies, an ice cream parlor, incredible meze served on the aft deck. The idea behind this is that everyone is a rockstar, and rockstars eat when they want, where they want. Don’t feel like getting up and getting food?  Then call for Ship Eats, Virgin’s version of room service, but instead of just having it ordered to your room, you can have it delivered to you wherever you are on the ship.  Are you thirsty for some bubbles?  Well, the ship’s motto is “save water, drink champagne.” So just open up the Virgin Voyages app on your phone, shake the phone 3 times and someone will deliver champagne to you wherever you are.  Yes, you can “Shake for Champagne.”   There are no elegant nights, formal nights, etc. so no dress code and no reason to pack a gown or suit. After all, no one tells rockstars what to wear. 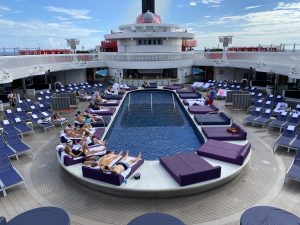 Probably our most fun dinner ever on a cruise was the night we ate at Gunbae, the Korean BBQ restaurant.  The meal was participatory with a crew member cooking for us at the table and teaching us drinking games. We sat with a delightful woman and her mother who was celebrating her 80th birthday and their friends and where I learned one should never go up against an 80-year old in drinking games-   you will lose.  The food on the ship was incredible – some of the best I ever had on any cruise.  And it’s ALL included.  Unlike other ships which charge for specialty restaurants, there are no surcharges for any dining on the ship. 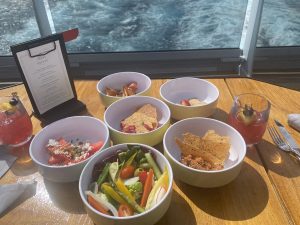 Some meze served on the aft of the ship.

Of course, as with any cruise line, there were ample bars and lounges. To pay for any drinks, we just tapped the wristband we were issued. There were no bills to sign. What made this ship unique was the sheer amount of actual lounge space – every available space was used as a space to just lounge around.  You were encouraged to just luxuriate in being on a cruise and not compelled to fill your day with art auctions, shopping sales, sexiest man contests, and all the other things you will find on a traditional ocean cruise. You could do it all or nothing, but there whatever you chose was just fine.

Entertainment was a far cry from the Broadway-style productions cruise lines have been churning out.  The main theater was a transformable performance space that one night accommodated an extraordinary acrobatic show that was a take on West Side Story with some of the most incredible acrobatics I have ever seen.  Another night it accommodated Puddles, the singing clown from America’s Got Talent – it was a fantastic show that I was not prepared for at all.

One night we headed over to The Manor, a smaller, more intimate space turned dance club after hours for a comedy/cabaret by “sexologist Dr. A” for her show, “Never Sleep Alone.”  The more adventurous guests sat up front to participate in some, uh, demonstrations, while the rest of us voyeurs sat further back (yes, they do warn you  and don’t put anyone in front that doesn’t want to participate).

There is a casino, not large, but a decent size. You can also let out your inner diva in karaoke, either in public sessions or in one of the ship’s little private karaoke rooms. And let’s not forget the Scarlet Night pool party where everyone onboard is encouraged to dress in a shade of red to dance the night away. 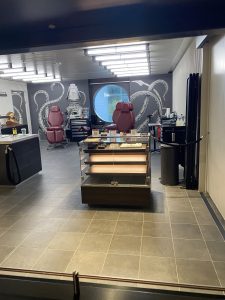 Squid Ink – the only tattoo parlor at sea

Among the shops onboard, you had some typical jewelry shops, but thankfully, none of the crew members gave any of the guests the hard sell or tried to sweet talk them into 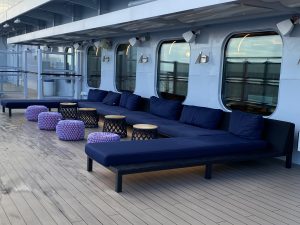 One of the many places to lounge onboard

coming into the store which was a nice change.  But, the ship also featured Squid Ink, the first tattoo parlor at sea and probably one of the most popular places on the ship judging by the constant stream of people going in and out.  Plus, there’s a record shop selling vinyl by some of Richard Branson’s favorite artists (a copy of the Never Mind the Bollocks, Here’s the Sex Pistols was selling for $77.00 – now I sort of regret getting rid of mine).  The one thing missing but not missed? Kids’ clubs, because it is adults-only cruising for 18+.

The main focus of Virgin Voyages is wellness and sustainability.  The ship’s Athletic Club includes an outdoor training camp, boxing ring, basketball court, and track. Featured activities during the day on the cruise were fitness classes such as bungee yoga, 80’s cardio, HIIT, spin, and in some ports, even curated hikes. All the classes are included in the price so don’t be afraid to try them all. And if you don’t want to break a sweat, that’s fine. Head to the Redemption Spa for a little pampering.

The cruise line is the first line to reach carbon neutrality. The tech onboard and the ship design are all geared towards using less energy.  You will not find any single-use plastics – straws, water bottles, shopping bags – they are all banned.  Every decision made in the ships’ operations is designed with reducing waste. 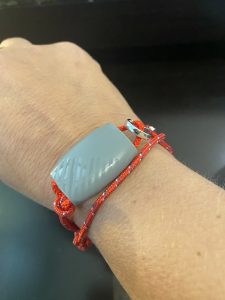 Everyone got a bracelet which served as our room and our credit card.

So, what exactly is included in the price of a Virgin Voyage?  Of course, your cruise accommodations, ALL meals, ALL gratuities, ALL fitness classes, wifi, and basic bevvies (what they call drinks on the ship) such as water, juices, and soda.  Guests in the rockstar suites board through a VIP entrance and get access to a private lounge, bottomless in-room bar, complimentary drinks and a daily bar tab, daily complimentary access to the Thermal Suite in the spa, private transfers, and more.

Not knowing what to expect before boarding, I had to put aside everything I knew about cruising. Once I did, I was thrilled with Virgin’s model. I loved tapping my band for food and beverage and never having to worry about signing a bill or the gratuities. I loved the hip vibe and not feeling like I missed out on anything if I just felt like chilling by the pool. And yes, as a mother of 2, I did like not being splashed in the pool by kids. I came off the ship energized and relaxed and can’t wait to sail again and hope to try out one of the Mediterranean itineraries next year.  What about you?  Want to know more about sailing the Virgin way?  Give me a call and let’s get your one-of-a-kind vacation booked! 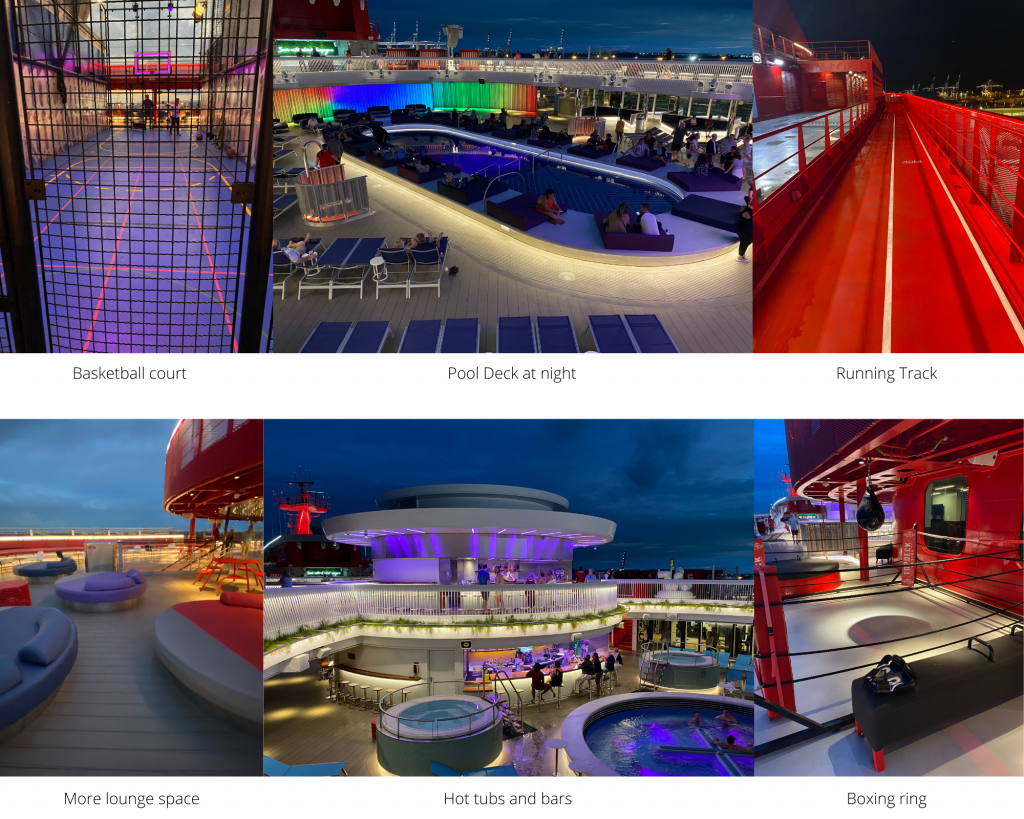 Some of the many other spaces on the ship

Join me on a Scandinavian adventure!