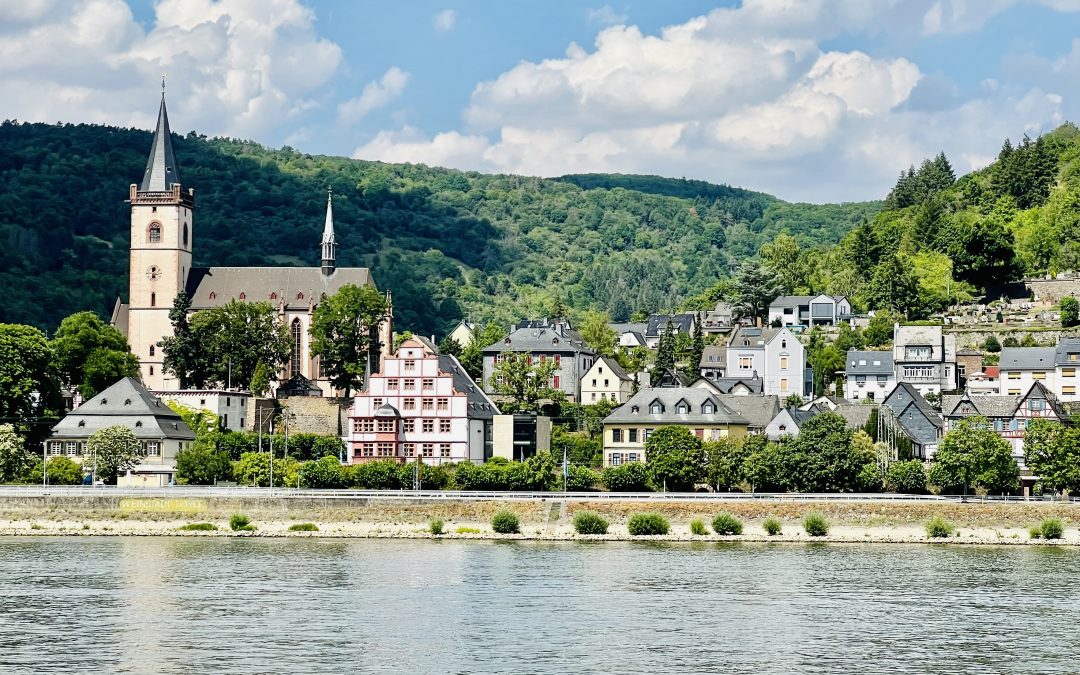 Palaces, castles, medieval towns, rolling hillsides covered in grapevines, schnitzel and pretzels – those are just some of the things that characterized my family’s long-awaited trip to Germany and Austria.  It’s a trip that has long been in the making.  My husband is ½ German and has been desperate to go back since his last visit when he was a teen, and neither my kids nor I had been there.  Having cancelled the trip twice over the past two years, I was on pins and needles every moment until we boarded the plane (yes, even travel advisors get nervous).

Germany and Austria were everything I imagined, and more.  Picture the scenes of the fairytales of your childhood and that is Bavaria.

Here are highlights of the first half of our trip – Part 2 will come next week.

We arrived in Frankfurt. Thankfully, we had no issues with our flights, and since we traveled carry-on only our bags arrived with us. It felt like the world’s longest airport, but even so, we were through customs and on our way within an hour of getting off the plane.

Frankfurt is the headquarters of the European Union and the financial hub of Germany.  The city was 80% destroyed during WWII and when it came time to rebuild, it was decided to build it as a new, modern city rather than in the traditional, Old World style.  In fact, it’s one of the only German cities that have allowed modern skyscrapers. 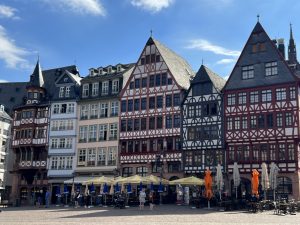 If you want to see traditional architecture, head to Alstadt, or Old Town which is centered on the Gothic cathedral and lined with cobbled streets and gabled buildings.  Nearby is the Kleinmarkethalle which is the center of the Frankfurt food scene.  If you are a foodie, don’t you dare miss it when in town.  Browsing is a delight as you gaze at the stunning desserts, local produce, meats, cheeses, and bread. We dined on massive sandwiches and glasses of wine as our bodies adjusted to the time.

Dinner that night is probably on our top 10 dinners we’ve eaten.  It was at Klosterhof, an old Carmelite monastery turned restaurant and beer garden. 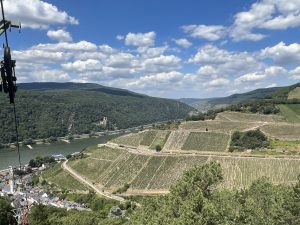 View from the chairlift in Rudesheim

The only reason we stayed in Frankfurt was that it’s a jumping off point for day cruises on the Rhine.  While the Main flows through the city, Frankfurt is a gateway to the Rhine Valley.  On our second day, we hopped into a van with a small group and headed toward the town of Rudesheim am Rhein. Rudesheim is known for winemaking, especially Riesling, and its flaming brandy coffee. Once there, we took a chairlift down the mountain to catch our boat.  The lift offered us stunning views of the countryside and the magnificent vines that graced the hills (I still have not found out how the vines on such steep terrain are harvested).

Once at the bottom, we hopped on our boat for a leisurely sail down the Rhine that took us past centuries-old castles and villages and endless vineyards.  The scenery was exactly as breathtaking as imagined.  The highlight of the journey was sailing by the famed Lorelei rock where legend says sirens lured sailors to their deaths.  Fun fact, for some reason I always imagined it to be mermaids.  I have no idea why I thought mermaids lived in the Rhine.  We disembarked in St. Goarshausen, home to the rock, where we enjoyed a tasting of some of the region’s best wines, including the Riesling and eiswein (ice wine).  From there, it was back to Frankfurt to prepare for our next destination. 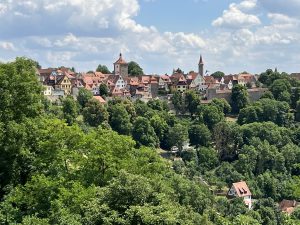 Rothenburg from atop the wall

Rothenburg ob der Tauber is a roughly 3-hour train ride from Frankfurt.  However, we opted to book a private transfer instead only because there are no nonstop trains between the two, so it was quicker to drive.  In the event you’ve not heard of Rothenburg, you surely have seen pictures of it. . It is truly the most picturesque, perfect medieval town ever built.   It’s popular as a day trip for tourists, but we chose to spend the night to see the town without the crowds and to give us as much time as possible to wander the streets here.

Our hotel, the Gastof Goldener Greifen, was the absolute cutest hotel smack dab in the center of town – we couldn’t get any closer unless we moved in with the mayor.  This 650-year-old family-owned hotel had some of the most spacious rooms of any hotel I’ve visited in Europe and is perfect for families. 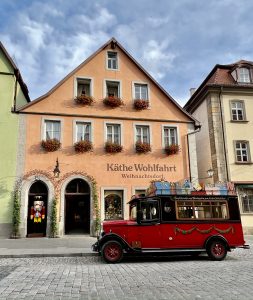 If you are a Christmas fan, then the mothership is calling you home in Rothenburg – Kathe Wohlfart.  The main shop boasts a Christmas museum and exhibition, and with over 30,000 decorations claims to have the world’s largest selection of traditional German Christmas ornaments.  The only souvenir I wanted from this trip was a Nutcracker from there but the selection was so large that it took me more time in the store than my family appreciated.  The store shipped it to me in the US, which was convenient and quick.

The town of Rothenburg is only one of three towns in Germany to have completely intact city walls.  About 1.5 miles of wall encircles the town, which sustained about 40% damage during WWII – not a log compared to other German towns and cities.  Nine of the towers and about 2,000 feet of the wall were damaged.  As you walk it, you’ll see stones engraved with the names of people who bought a portion of the wall to help the town’s restoration after the war. Head off the wall and walk one of the paths outside for some stunning views of the valley. 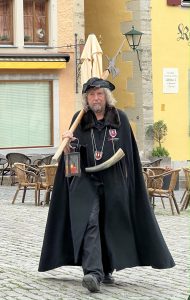 The Night Watchman of Rothenburg

Being an almost 1,000-year-old medieval town, there is no shortage of stories to be told about life in the middle ages, and who better to tell them than Hans-Georg Baumgartner, the Night Watchman. Traditionally, night watchmen walked the walls of Rothenburg at night and were responsible for the town’s safety.  Now, Mr. Baumgartner regales guests with stories on an entertaining, family-friendly walk  around town each evening.  If you’re looking for any reason to stay overnight, he is it.

After the 45-minute tour, we took advantage of the empty streets to take pictures of some of the most famous sites, including the Plönlein. You may not recognize the name, but you would know the image.  This adorable yellow house sitting at the quarter was the inspiration for Walt Disney’s Pinocchio.

The next morning after a few more photos, we were picked up for our drive to Munich which would be our home for the next 4 nights.  Stay tuned for next week when I tell you all about our visit there and to one of my newest favorite cities, Salzburg.

Are you looking for more travel inspiration? Check out these articles!

4 Gorgeous Castles You Can Stay In and Feel Like Royalty

6 Smallest and Amazing Micro-States of Europe