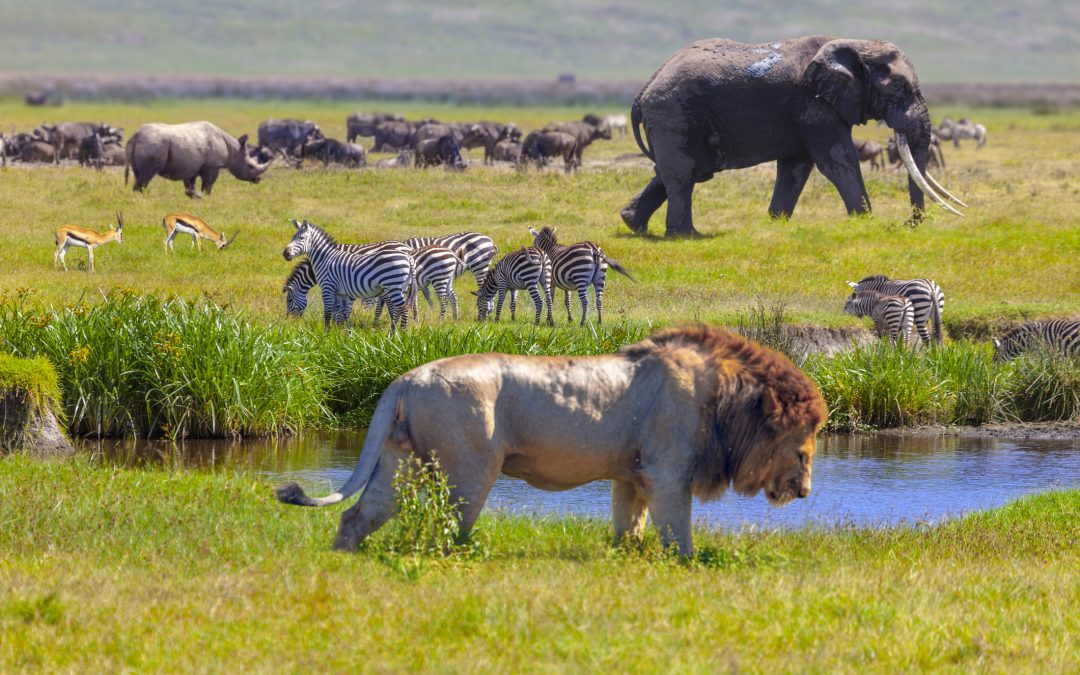 Have you every dreamed of seeing the Big 5* or the Great Migration** in a place other than at Disney’s Animal Kingdom? Do you love both travel and wildlife and want to combine the two into an unforgettable trip? If the answer is yes, then consider an African safari as part of your bucket list destinations

Why a safari and where are the best places to take one? In this article, I will tell you why a safari makes a great family vacation and the places to see the “Greatest Wildlife Show on Earth.

So, why a safari? Besides the obvious – you can see some of the most magnificent animals alive, satisfying all your childhood dreams, it makes an amazing family vacation. The memories are priceless and the learning opportunities are endless. Many lodges offer Junior Ranger programs, and some safaris offer opportunities to visit local tribal villages.

While safaris sound expensive, they offer excellent value for the money. They come in all different ranges, and most include deluxe accommodations, meals, sightseeing, game drives and game walks, and airport pickup plus a host of kid-friendly activities. As your trusted travel advisor, I, along with your tour operator, will make sure all you have to do is focus on enjoying your vacation. The cost of your safari also includes conservation fees for the parks you visit, thus helping conservation efforts and saving endangered species.

Now that you have decided to consider a safari in your future, where to go? Here are 5 of the best places in Africa for any family. 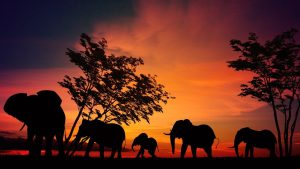 Elephants on the Serengeti (photo by Nato Pereira)

Serengeti National Park, Tanzania
The Serengeti is the place that inspired Disney’s Lion King and probably the best safari destination in the world. It is also part of the Mara-Serengeti ecosystem, one of the oldest ecosystems on earth. Here you will find plants and animals that have barely changed over the past million years.

Of course, you will see the Big 5 here and other favorites such as giraffe and cheetahs,, but the true attraction is the migration of over two million wildebeest, zebra, impala and gazelle in search of greener pastures. This is known as the real “Greatest Show on Earth.” Each year, the animals set off around July towards the Masai Mara in Kenya, and then return in October or November. During this migration, the wildebeest dodge predators such as lions and leopards, while overhead fly huge clouds of migrating birds. This is the largest terrestrial mammal migration in the world and one of the Seven Natural Wonders of Africa. If you are fortunate enough to book your safari during this time, you will never forget this experience as long as you live. 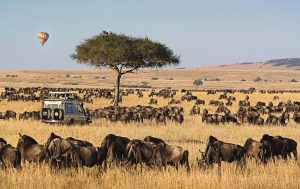 Wildebeest in the Maasai Mara

Maasai Mara National Reserve, Kenya
The other half of the Mara-Serengeti ecosystem is the Maasai Mara National Reserve in Kenya. This is the other place to see the Great Migration, as well as all the Big 5 and giraffe, along with hippos and crocodiles lurking in the rivers. It is positively stunning here with the Mara and Talek rivers winding through the grasslands and river woodlands

But what’s so wonderful about Maasai Mara is that it’s not just about the wildlife, it’s about the culture, too. Most safaris offer a chance to visit a traditional Maasai village where you’ll meet the people and learn about their traditions. 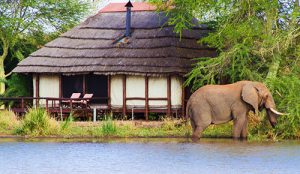 Kruger National Park, South Africa
Kruger is the oldest park in South Africa and one of the most popular safari destinations on the continent. It’s only 211 miles from Johannesburg, and the driver there is just as beautiful as the park itself.

Kruger is the size of Israel or Slovenia, but in addition to seeing the most popular Big 5 animals, you will also have a chance to find the lesser-known “Little 5” (Elephant Shrew, Ant Lion, Rhinoceros Beetle, Buffalo Weaver, and Leopard Tortoise).

If you venture with your group to one of the private reserves around the park, you can have the opportunity to learn about the traditions and foods of the Shangaan people in a local village.

Chobe National Park, Botswana
If you are an elephant lover, then Chobe National Park is your place because it’s all about the elephants here. There are about 120,000 of these majestic creatures in the park. The best way to see them as well as the buffalo, lion and leopards in the park is on a Chobe River Cruise as they come to the riverbank to drink. Take a short sunset cruise, or even consider a 2-5 night luxury cruise in addition to your land-based safari.

The best time here to see the elephant herds is May to October, though the overall best time for wildlife viewing is August to October. 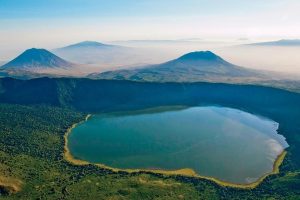 Inside the Ngorongoro crater

Ngorongoro Conversation Area, Tanzania
This is one of the Seven Natural Wonders of Africa and with good reason. Ngorongoro is the world’s largest inactive, intact, and unfilled volcanic calderas. Surraounded by a 600-meter wall, it’s in Ngorongoro that you will find over 25,000 game animals including the Big 5. The conservation area also protects Tanzania’s last remaining endangered Black Rhino. The crater is dotted with lakes where you will find hippo and huge flocks of pink flamingo.

Humans have also lived here for 3 million years and occupied by tribes such as the Maasai for over 2,000. You can visit a Maasai village and see casts of fossilized footprints at Olduvai Gorge. These footprints are considered proof that humans walked on two legs at least 3.7 million years ago

Are you ready to plan your dream safari? Give me a call and I can make it happen!

**Movement of vast numbers of wildebeest, zebra, impala, and gazelle through the Serengeti

Looking for more travel inspiration?  Check out these articles.

Amazing Trips for Every Season

5 Extraordinary Life Changing Trips You Must Try at Least Once