Out of Africa – My dream trip to Kenya (finally!) 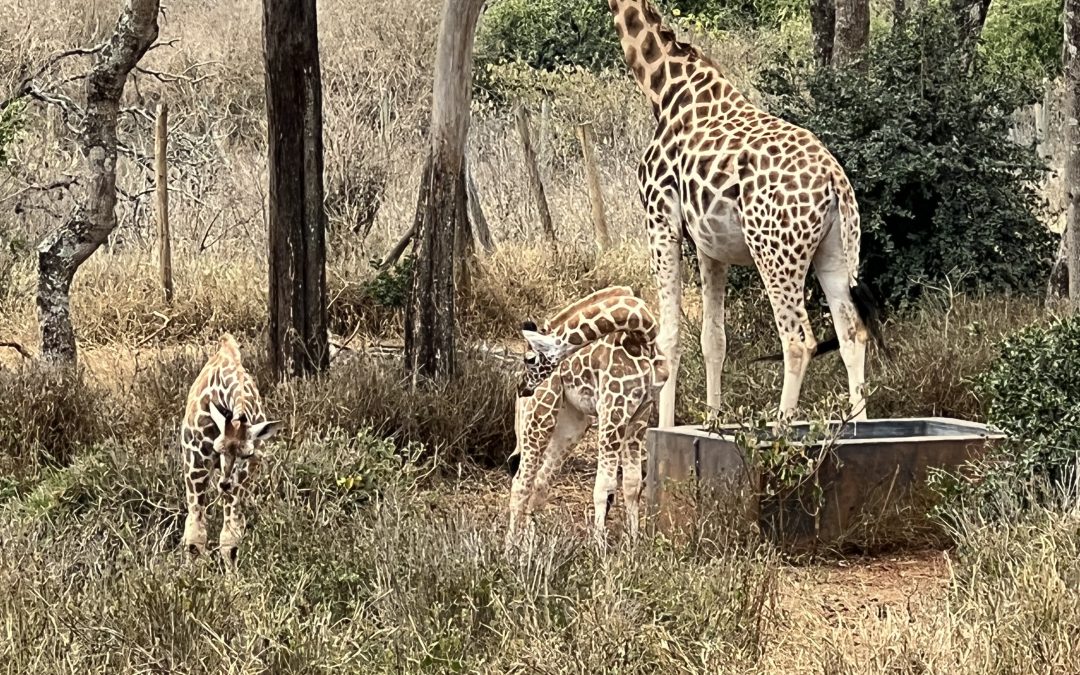 A month after I left for my first trip to Africa, I am finally getting around to putting into words what Kenya was like. I got home the day before Thanksgiving and life just got in the way, so I’m sorry for this late email.

Kenya – I am not sure how to adequately describe my recent trip.  I don’t know if there are enough words to describe how incredible it was, how amazing the country and its people are.

I flew Kenya Airways out of JFK on November 11.  The airline runs daily nonstop flights from JFK to Nairobi which made it the logical choice for this trip.  This was my first time on Kenya Airways, so I wasn’t sure what to expect, but overall I was pleasantly surprised.  I had stressed before the flight about bringing my CPAP, duffle bag and personal item as carryons, and even sought permission from the airline to bring on the CPAP in the cabin (as per their instructions), but in the end, no one cared. The flight attendants were nice and helpful, the plane clean and quiet. The airline flies the A380, a newer, updated plane.  I had upgraded to Premium Economy for the extra legroom that made a huge difference, especially for someone like myself who needs to stretch out her knee.  The onboard promo film highly touted their comfy, padded seats.  I’m not sure what padding they were talking about, but it wasn’t in my seat.  I had to cushion the seat with the airline blankets in order to be comfortable for 13 hours. 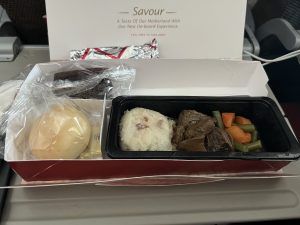 The unfortunate thing about Kenya Airways is 1. they have no wifi on any of their planes and 2. their onboard entertainment stinks.  I mean, maybe you’ll enjoy it if you like Dumb and Dumber or the Wedding Singer, two of their movie offerings.  But suggest making sure your kindle is charged and loaded, and you download your favorite movies to your devices before you go.  Food was standard airline food.  We got 2 meals and a snack, but nothing to get excited about.  I don’t think I remember what it was, actually.  Make sure you bring on plenty of snacks to tide you over the long flight.

We landed in Nairobi where I met the small group of travel agents I’d be traveling with, along with representatives from our local tour operator, Sense of Africa, who drove us to our first hotel, House of Waine.  The unique thing about the drive from the airport is that on one side of the highway is the city, and the other side is Nairobi National Park.  We felt like Kenya rolled out all the stops in welcoming us because as we drove from the airport, we saw giraffe, elephants and cape buffalo, just hanging out near the side of the road, unphased by all the traffic or the plans flying overhead. As you drive through parts of the city, baboons just lounge about, begging for food from passerby.  This certainly was not Baltimore! 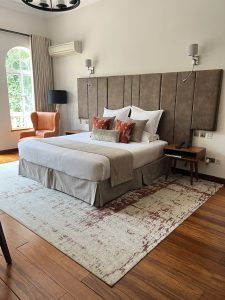 My room at House of Waine

House of Waine is a small, boutique hotel  – only 11 rooms plus a cottage – located in the posh suburb of Karen (more on that name later).  Family owned, the name is made up of the initials of the family members. It was such a refreshing place to land after the long flight.  After being greeted with glasses of fresh mango juice, I was escorted to a stunning room with 12-foot high ceilings, lush hardwood floors, plush bed and gorgeous garden views.  All rooms are named, and mine was called “Manyatta” which is the Maasai word for home.  This place was an oasis in the city. The hotel also features immaculate gardens that surround a secluded pool.  It’s perfect after a day of touring. 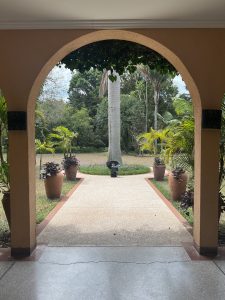 Walk out to the grounds of House of Waine

Service here was impeccable and the food was delicious.  My only regret is that I forgot to ask the name of the Sauvignon Blanc I had before dinner – it was probably the best I have ever had.

Some of Nairobi’s most famous attractions are in close proximity to House of Waine which is also why it’s a great jumping off point for a trip to Kenya.  After a restful night’s sleep complete with hot water bottle in my bed (I never knew how much I needed that in my life until then), our first full day started out with a visit to the Giraffe Center. Created by the African Fund for Endangered Wildlife, the Giraffe Center serves as a breeding and conservation center for the Rothschild giraffe that are only found in the grasslands of East Africa. 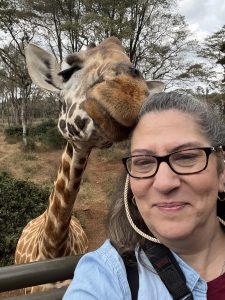 The main attraction here is standing on a raised platform to feed the little piggies, I mean, giraffes.  Giraffes can eat up to 75 pounds of food a day – guests feed them little pellets which are pretty much just snacks for them.  If you don’t feed them fast enough, they may head butt you (as I say from first-hand experience).   Also, on property is the famous Giraffe Manor.  If you 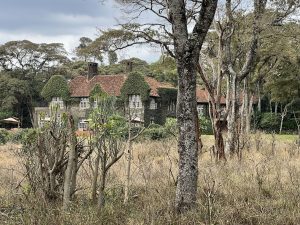 don’t recognize the name, you certainly have seen the pictures of the giraffes sticking their heads through the windows while hotel guests feed them.  Starting $1,000 a night, Giraffe Manor tends to be a bucket list destination for many animal lovers.  Twice a day – breakfast and afternoon tea – the giraffes from the Center wander over for snacks. However, they don’t freely wander the Manor property as you may think after looking at photos.  After they are fed, they go back to the Center. 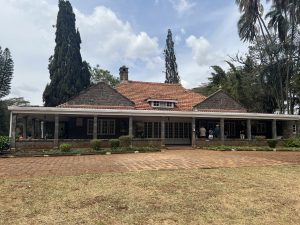 Karen Blixen’s house at the foot of the Ngong Hills

From the Giraffe Center, we headed to the Karen Blixen Musuem.  Fans of the book or movie “Out of Africa” will recognize that name.  Karen Blixen was a Danish woman who, in a nutshell, came to Kenya to run a coffee plantation.  However, conditions in that part of the country were not right for growing coffee and it failed.  Ultimately, the Danish government bought the land and gifted it back to Kenya who then parceled it out, creating the suburb of Karen.  Driving around the region, you’ll find hospitals, schools and universities, churches and more all named Karen after her and the work she did to help the Kenyan people. Air

The museum sits in her original, small, unassuming house on lovely grounds at the foot of the Ngong Hills (Robert Redford and hair washing not included).  The house contains both the original décor as well as props from the film. The grounds make for a nice stroll and also contain some of the original equipment from the farm. 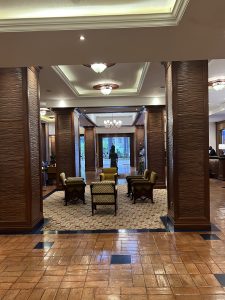 Lobby of the Nairobi Serena

After the touring we headed to our second hotel of our stay, the Nairobi Serena in the heart of the city, prior to heading out to the national parks and game drives the next morning.  The Nairobi Serena is a large hotel that caters to both business travelers and tourists alike, not unlike your standard JW Marriott or Hilton.  However, it is priced well and in a central location.  Rooms were small, but very comfortable with all the amenities you expect of such a large tourist accommodation.  The one thing I notice in any hotel is the accessibility of outlets in the rooms, and the Nairobi Serena didn’t disappoint (unlike many US hotels which seem to forget many of us like to plug in CPAP machines and phones next to our beds).

There is a great pool with a poolside bar as well as a spa which we didn’t have time to check out.  The grounds were full of lush gardens that gave no indication that we were situated right in the middle of the capital city.  We decided to just get pizza in the bar for dinner and weirdly enough, the Hawaiian pizza was also the best we ever had.

The next morning we met our ride to take us to the train station for the next adventure and the true heart of our vacation – journeys through some of the most stunning national parks in all of Africa.

Unfortunately, we did not get to visit the elephant orphanage, the Sheldrick Wildlife Trust. If you recall, the reason I was on this trip is because I won a contest naming a baby elephant.  My girl Tumaini (hope in Swahili) was at the Sheldrick, but because of scheduling, we simply couldn’t make it as it’s open to the public only between 10:00am and 12:00pm each day.  So if you ever get there, look for Tumaini and give her a smooch for me.

Stay tuned for the next installment of my trip where you’ll hear about lions galore, what it’s like to travel through the savannah and how so many bucket list dreams in Africa came true.

A full photo album will be put up on the website soon!

Looking for more travel inspiration?  Check out these articles!

Carry-on to Kenya: Follow me on my extraordinary journey Pt. 2